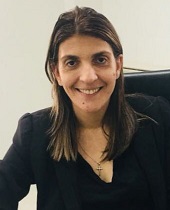 Christiana Markou holds an LL.B (Hons.) from the University of Sheffield (UK) and an LL.M in International, Commercial and European Law from the same university. She was called to the Cyprus Bar Association in 2001 after passing the relevant examination in 12 different areas of Cyprus law with honours in 2000. She is also a holder of the degree of Doctor of Philosophy (PhD) from the University of Lancaster (UK). Her thesis is on EU online consumer law and data protection/privacy. She has been practicing law since 2000 as an associate in a major Cypriot law firm until the end of 2005. Since 2005, she manages C. MARKOU & CO LLC, a Cyprus law firm. She mainly deals with European law, Intellectual property litigation and registrations, Corporate and Commercial Law, Administrative Law, Personal Injury, Consumer Protection, IT/E-Commerce law and Data Protection, Cyber Security and Privacy, though she has extensive knowledge in other areas of law enabling her to head a law office of 5 lawyers. She is advising on legal aspects of technology gaming and gambling start-ups and acts as the legal advisor of software and IT companies. She is representing several consumers in actions against banks relating to consumer credit and credit agreements in general and has been acting as the Cyprus law expert in class actions between borrowers and banks pending before the UK courts. She has been offering legal support and guidance to the Ministry of Commerce regarding the preparation of the Certain Aspects of Information Society Services, Especially E-Commerce, and Related Issues (Amendment) Law of 2016 (Law 156(Ι)/2004 and Amendment Ν.97(Ι)/2007) and also for the Regulations regarding the application of the relevant law. She also acts as the legal advisor of the Cyprus Betting Companies Association and frequently consults with the National Betting Authority on matters of Administrative law, Betting law and European law. She also appears before the House of Representatives offering opinion and suggestions during the discussions of various draft laws.

Amongst others, she is invited to participate as a legal expert in EU-funded studies and has taken the initiative for and co-managed the establishment of the IT Law Special Interest Group of the Cyprus Computer Society, which has organized conferences and seminars aimed at educating lawyers, judges and other interested parties in the then newly-emerged area of IT/computer law. Furthermore, she is organizing and/or speaking at conferences including seminars and workshops on various legal topics and teaches law at undergraduate, postgraduate and doctorate level. She publishes in international scientific legal journals and books mainly in the areas of EU consumer law and EU data protection, cyber security and privacy law.